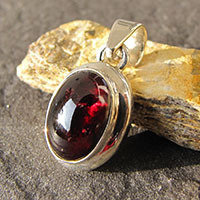 Garnet gemstones are found in jewelry from early Egyptian, Greek and Roman times. Many researchers and travelers used to like to carry a garnet with them. Garnet gemstones were popular as talismans and protective stones, because it was believed at the time that the garnet lighted up the night and protected its wearer from harm.
The heyday of garnet jewelry was the early Middle Ages, with garnets also being used to decorate objects. In the Middle Ages, the garnet was also known as a carbuncle stone. The Bohemian garnet has achieved particular fame.

Garnet gems are relatively insensitive and easy to work with. They just don't love hard knocks and improper heating at all.

Let yourself be inspired by the magic of the dark red glimmering garnet - here you will find pendant jewelry with garnet from the best Indian craft tradition, made in 925 sterling silver.