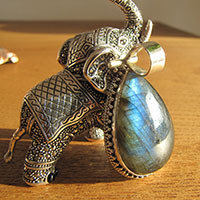 We offer attractive silver pendants with labradorite gemstones. The silver surround highlights the fire of the gem - whether it's an elegant, sleek silver edging or embellishments in artful ethnic style - the labradorite pendants are Indian crafts in 925 sterling silver. Let yourself be inspired by the labradorit.

More about Labradorite on Wikipedia

Labradorite was named after its first locality, the Labrador peninsula. The iridescent play of colours in metallic shine is remarkable with labradorite, the so-called labradorescence. This shimmer is predominantly blue, violet and green, but occasionally also found in other colours. The most sought after is the labradorization in the whole spectrum. Labradorite is often processed into gemstones because of its beautiful shimmer.