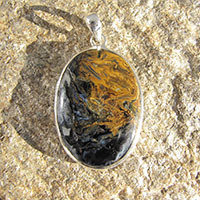 Pietersite is a mixture of the gemstones falcon's-eye and tiger's-eye. The surface of a pietersite is not clearly structured, but shows an appealing merging of the colours. The mineral owes its unique appearance to its formation process, in which the crystal fragments were broken into many pieces and re-formed and fused together with quartz. (Technical term: brecciated; from breccia)

Depending on whether the falcon's-eye or the tiger's-eye is more pronounced, the pietersite ranges in colour from black-blue to golden-brown. The colour patterns often look like surreal paintings and make each piece of Pietersite jewelry unique.

Pietersite was not discovered until 1962 in today's Namibia by Sidney 'Sid' Pieters. Apart from the site discovered in Nanyang/China in 1993, Namibia is the only find spot where Pietersite gemstones have been found.

The pietersite has a blazing glow and is relatively insensitive with its Mohs hardness of 6.5 to 7 from the surface. Pietersite is almost exclusively cut cabochon. The spherical, round cut maximizes the gemstone's cat-eye effect.

The Cat's-eye Effect (Chatoyancy; see Wikipedia) is an areal, shimmering light effect in minerals and gemstones.
With this effect, when illuminated with a point light source, a bright streak of light is noticeable, which runs perpendicular to the fibers and moves across the surface of the stone as it moves. This streak of light is meant to be reminiscent of the iris in a cat's eye (French: chat). Another explanation of the word is French chatoyer = to shimmer.

The Pietersite gemstones in top quality are wonderful crafted in 925 sterling silver and wonderful pieces of jewelry for ♀ + ♂ both women and men.
Be inspired by the Indian craftsmanship with pietersite and its impressive play of colours.